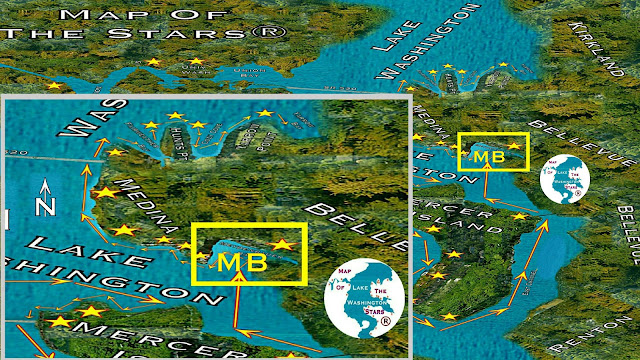 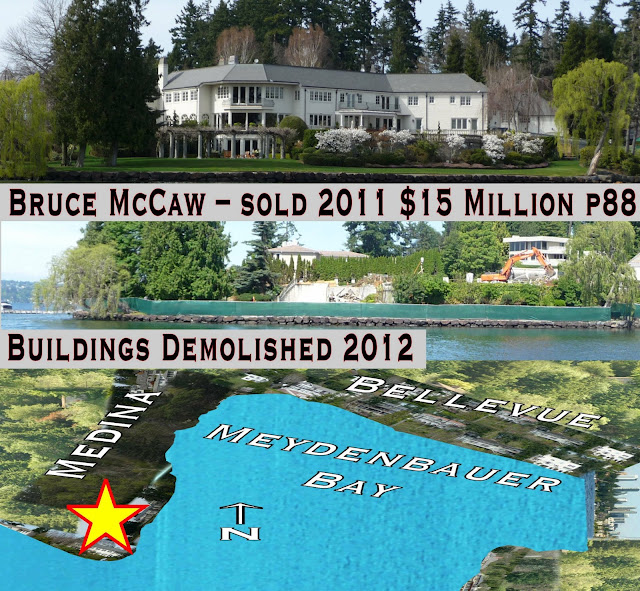 Looking West at Groat Point in 2010

The Groat Point Estate in 2011

The Groat Point Estate in late 2012
Bruce McCaw sold, for $15.3 million, his Medina Groat Point estate in January 2011 (Seattle Mansions 2/13/11 post) to a trustee for John E. and Debbie Ellison Bacon. This was the highest priced sale of waterfront property in 2011. The Bacon’s demolished the buildings in 2012 and are scheduled to submit plans for new buildings later this year.
The property was listed for sale in 2009 for $34 million and dropped to $27 million in 2010. The listing agent was Terre Foster, Windermere: “The Grand Point of Medina. A landmark offered for the first time this century. Commanding 527 feet of some of the most coveted waterfront in the world, the Chateau takes its place among the great estates in the Northwest. Regal grounds split into expansive views.” The estate had 13,940 sq ft on 1.89 acres with 527 feet of waterfront, 6 bedrooms and 9 baths.
This is considered one of ’s premiere lots with spectacular 300° views that include downtown , and the Olympics with the top of the skyline in the foreground. The location is minutes from downtown .
Bruce is the oldest of four brothers who were the pioneers of cellular communications. He had been listed by Forbes as one of the wealthiest people in the world but has not been on its recent lists as a result of declining stock market values. He is now involved in large scale commercial real estate investments with his Pistol Creek Financial Co. He is also involved in auto racing as president of Bellevue-based PacWest Racing Group LLC and director of Michigan-based Championship Auto Racing Teams, Inc. Bruce and his wife, Jolene, moved into Craig McCaw’s Hunts Point Castle and hosted a fund raiser for Paul Ryan in 2012 (2/13/13 post).
John E. and Debbie Ellison Bacon established the multimillion dollar Bacon Family Foundation that supports local children and family organizations. John, Thomas Ellison and Ellison’s and Debbie’s father, Bill Ellison (the founder of the company), were the principal owners of Bellevue-based Savers, Inc. The company is an international chain of thrift stores and operates under the name of in the PNW. In 2000 Bill Ellison and Bacon sold their interest to based Berkshire Partners LLC for $45 million. The Bacons and Thomas Ellison own a mansion about a seventh of a mile to the northeast in that is for sale for $8.9 million (post in LW Cruising).


More information about the prior mansion and Bruce McCaw is in Lake Washington 130 Homes on pages 88 and 106.
Posted by David Dykstra at 6:54 PM