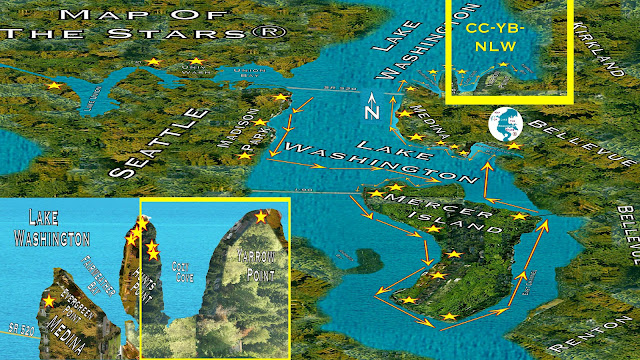 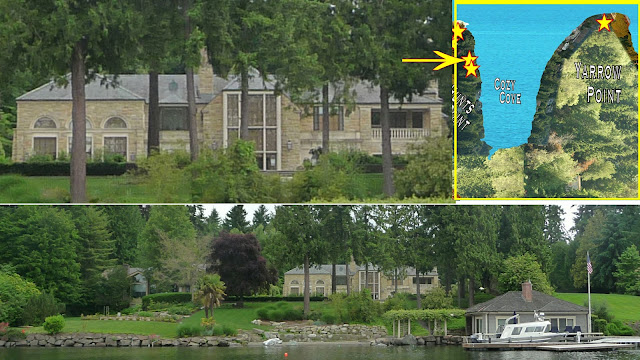 
Kenny G (Gorelick) returned home last week for eight performances at ’s Jazz Alley. A review of his performances was in The Seattle Times on 4/27/12.


He used to live on the Hunts Point property, with two mansions, pictured above. He was born in and went to Franklin HS where he played in the jazz band and played on the golf team. He is now one of the top celebrity amateur golfers. On summer evenings when he lived in Hunts Point he would sometimes sit on the end of the dock and play his saxophone. His beautiful music would resonate throughout the cove.
Kenny G won the 1994 Grammy Award for Best Instrumental Composition Forever in Love. He is best known for his saxophone playing. He is the best selling instrumentalist in the world with over 70 million singles and albums sold. His album Breathless sold 12 million copies. Songbird was his first number one singles hit in 1986. His other popular singles include Forever In Love, Sentimental, Silhouette and The Wedding Song. He composes and writes most of his songs along with songs for others.
This property is now the home (LW 130 Homes page 152 and 153) of Craig and Susan McCaw. It was purchased in 1999 from Kenny G in a private transaction estimated at more than $20 million. The two mansions have 15,810 sq ft on 4.3 acres with 327 feet of waterfront, 8 bedrooms and 10.5 baths.
Susan is a former U.S. Ambassador to . Craig was the leader or the world famous McCaw brothers, Bruce (1946- ), Craig (1949- ), John (1951- ) and Keith (1953-2002). Keith and John formerly lived in Madison Park (4/16/12 LW Cruising post) and Bruce recently sold his estate (2/13/11 post). The brothers grew their deceased (1969) father’s, Elroy’s, businesses into the 20th largest cable carrier in the In the early 1980s they started in the fledging cellular phone industry. They founded Kirkland-based McCaw Cellular Communications, Inc. in 1984. In 1986 they sold the cable business for $750 million and bought MCI’s wireless operations for $122 million. McCaw Cellular went public in 1987 raising $2 billion. In 1994, with Craig as CEO, McCaw Cellular was sold to AT&T for $11.5 billion. Following the sale Craig’s net worth was $2.6 billion and each of the brothers’ was slightly less.
Kenny G is a friend of the McCaw families and performs at family weddings and other events. It is rumored that he stays in the 4,760 sq ft guest house in the lower left (partially obscured by trees) of the bottom picture when he is in the area. After selling the Hunts Point property he purchased a compound on the oceanfront from actor Leonardo DiCaprio.
Posted by David Dykstra at 4:52 PM No comments: 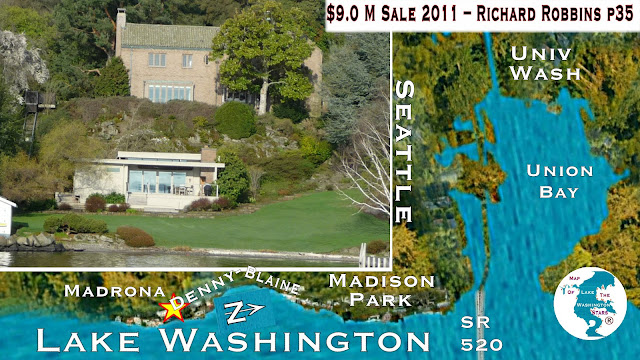 This Harrison/Denny-Blaine mansion is on page 35 of LW 130 Homes and is 7,060 sq ft on 0.8 acres with 120 feet of waterfront. This is the former home of Richard J. and Bonnie Robbins. The mansion was purchased for $9 million by LD and LAI LLC whose members are Aileen Dong and Alice Shen.
Richard Robbins was President of Kent-based The Robbins Company from 1958 to 1993 when it was acquired by Sweden-based Atlas Copco AB. The Robbins Company (Richard is now a Director) invents, engineers, develops and produces tunnel boring machines. It now operates as a subsidiary of Atlas. Richard’s father, James S. Robbins, founded The Robbins Company in 1952. Richard took over at the age of 25, two years after earning his engineering degree and upon the untimely death of his father. Richard and the company are noted for innovative designs that have enabled projects such as the tunnel and many aqueduct and hydro power tunnels. Richard holds 67 and foreign patents. He is now President of Seattle-based Robbins Group LLC which focuses on research and product development for The Robbins Company. In 2009 he received the Benjamin Franklin Medal in Engineering from the Philadelphia-based Franklin Institute.
The property was listed for sale for $10.8 million (Bob Bennion and Bob Deville, Windermere): “Exquisite 1932 Tudor Revival home with lake and mountain views, privately situated on .9+/- acre lot w/ beach house and 120' waterfront w/ dock. Available for first time in 40 years! Elegant dayrooms with pine-paneled walls; 2005 kitchen designed by Nils Finne and built by Schultz Miller; view terrace; 5 bedrooms; 5 baths; 4 fireplaces; office; rec room; wine cellar; 2-car garage. Beach house with kitchen, fireplace and 2 baths. Lovely grounds with sweeping lawns, mature plantings and tram.”
Up the hill above this home, Kurt Cobain, a famous musician, rented a house in the 1990s. He committed suicide in the house’s greenhouse and afterwards the greenhouse was torn down. A bench in also just above this home, is host to a makeshift shrine to Kurt. Thousands of fans of the music of Cobain’s band, Nirvana, have come here to pay tribute and guidebooks list the park as the “.”
Posted by David Dykstra at 11:37 AM No comments:

View From Dock
This is the former Denny-Blaine home of Barry and Ginger Ackerley. The mansion was purchased from the Ackerleys for $13.3 million by Dr. Frederic Hutchins Moll. The property was listed for sale for $15.0 Million in 2009 (Betsy Terry, Ewing and Clark) and later taken off the market.
Barry Ackerley (1935-2011) is a former owner of the NBA Seattle SuperSonics (aka Sonics). He purchased the Sonics in 1983 from Sam Schulman, who founded the team in 1967. The team won the NBA championship in 1979. During the 18 years of Ackerley’s ownership the team reached the playoffs 13 times. From The Seattle Times obituary: “Mr. Ackerley sold the Sonics in 2001 to a group of investors led by Howard Schultz [page 21 LW 130 Homes]. Mr. Ackerley was saddened when the team relocated to in 2008.” The team made the playoffs only once after it was sold by Ackerley in 2001. The Times article also noted “Ackerley came to and became its baron of billboards.” He was the founder and former Chairman/CEO of The Ackerley Group. The Ackerley Group owned television and radio stations that were purchased by Clear Channel Communications in 2001.
Dr. Moll graduated from ’s Lakeside HS in 1969. (Other LW 130 Homes graduates of include Charles Pigott ’47, Craig McCaw ’68, Paul Allen ’71 and Bill Gates ’73.) Dr. Moll received his MD from UW Medical School. He was a surgeon at Virginia Mason in . In 1989, Dr. Moll co-founded based Origin Medsystems, Inc., a medical device company, which was acquired by Eli Lilly in 1992 in a $150 million deal. In November 1995, Dr. Moll co-founded Intuitive Surgical Inc., another medical device company, and served as its first CEO. The company raised $6 million in a 2000 IPO. He co-founded based Hansen Medical in 2002. The company designs and manufactures medical robotics. He was CEO from inception to 2010 when he was named Executive Chairman of the Board of Directors. He resigned in 2011 and joined the BOD of Focused Ultrasound Surgery Foundation in . Maybe he is moving back to this home.
The mansion is on page 33 of LW 130 Homes and has 6,580 sq ft on 0.46 acres. It is a prime lot on a point with 146 feet of waterfront and two docks, a tennis court and swimming pool.
Posted by David Dykstra at 10:45 AM No comments:

Paul Allen is known for many things and one of them is his luxury yachts. His largest ones are pictured above. He is reported to own over fifteen 50 ft+ luxury yachts. Two of them are tenders on the Octopus. The Octopus was in the national news, including The Associated Press/Seattle Times 4/4/12 article, for the yacht’s use in a South Pacific search for a missing pilot. The pilot was involved in an official pursuit of illegal fishing operations.
The Octopus when it was launched in 2003 was listed as the largest and most expensive privately owned yacht. The mega-yacht has two helipads with enclosed hangers, seven boats used as tenders and runabouts, two submarines, several personal watercraft (PWC – sometimes improperly called jet-skis), a pool, a basketball court, 13 staterooms and 26 crew cabins on seven levels with more than 50,000 sq ft under roof. The Bornrich site now has it listed at number nine and his Tatoosh at number ten in its list of the 16 top privately owned super-yachts. The top ranked private yacht is the $485 million 558 foot long Eclipse owned by Russian multi-billionaire, Roman Abramovich.
The price of the Octopus and Tatoosh are each more than the estimated and appraised $150 million value of his 10 acre, 100,000+ sq ft under roof, campus/compound on Mercer Island. This compound with a viewing guide was featured in a 12/28/10 post. More information on Allen’s super-yachts can be found by clicking on the links for the Octopus, the Tatoosh and the Meduse.
Posted by David Dykstra at 1:11 PM 18 comments: