﻿
This (LW 130 Homes page 147) is the site of the former home of Stan Sayres (1897-1956). He was known as “The Legend of Lake Washington” and “The Fastest Man Afloat.” The 2 acre vacant lot is for sale for $19.7 million. With incredible views and with 750 feet of waterfront, it may be Lake Washington’s premiere waterfront lot.
Andre and Lisa Radandt purchased the property in 2005 for $17.5 million. They are from Bakersfield CA where they own Bolthouse Farms, one of the world’s largest carrot producers. They tried to preserve Sayres’ house but found it was not practical and it was demolished in 2008.
From the MLS listing:
Legendary Signature! A merger of nature's uncompromised beauty complemented by this vibrant Hunts Point position. Prominent at the tip, 1.93 acres of flat land. 846 feet of continuous waterfront. Magnificent new teak dock. Owners have also completed refurbishing the strong boulder bulkhead and have constructed two extraordinary granite walls. Two swathes of wade-in beaches. Parklike, the guardian of the peninsula ~ zoned for two lots. North, East and Western exposure. For those that can!
Posted by David Dykstra at 3:12 PM No comments: 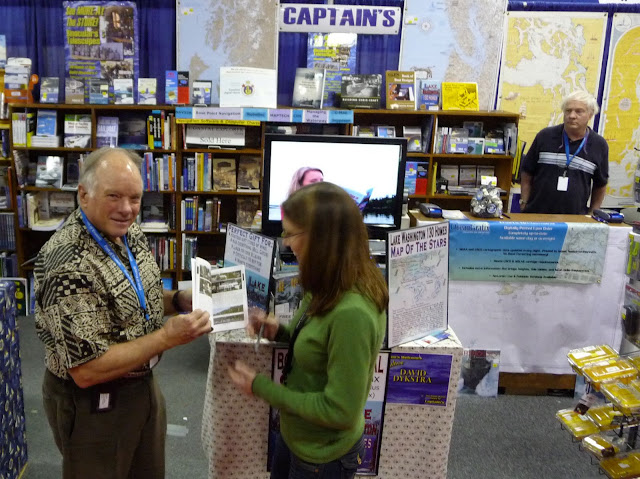 Lake Washington 130 Homes was a Seattle Boat Show “Best Selling Book” for the second year in a row.  The Boat Show has been in late January and early February of each year and will be for the foreseeable future.  I was at the last two shows signing copies of LW 130 Homes, playing on HDTV a multi-media presentation of the Evening Magazine segment on the book plus the book’s highlights.Books were available for purchase and I was signing them along with having an informal Q&A including my experiences in photographing the mansions and writing and self publishing this unique book.In addition I discussed and presented information on our plans for “LW Map of the StarsTM” cruise-tours featuring the book and a soon-to-be-available map.   My table and exhibit were at Captain’s Nautical Supplies booth – Concourse 2237.  I will be at the same place next year.
Attendance and activity this year was up from last year’s low.  Boat sales and interest are picking up.  Hopefully this is a sign that the area’s economy is also picking up.
(Updated – go to 1/5/12 post for 2012 show information. The 2012 show is through .)
Posted by David Dykstra at 8:56 AM 4 comments:


Bruce McCaw sold, for $15.3 million, his Medina Groat Point estate in January 2011 to to a trustee for John E. and Debbie Ellison Bacon. This was the highest priced sale of waterfront property in 2011. The property was listed for sale in 2009 for $34 million and dropped to $27 million in 2010. The listing agent was Terre Foster, Windermere – “The Grand Point of Medina. A landmark offered for the first time this century. Commanding 527 feet of some of the most coveted waterfront in the world, the Chateau takes its place among the great estates in the Northwest. Regal grounds split into expansive views.” The estate has 13,940 sq ft on 1.89 acres with 527 feet of waterfront, 6 bedrooms and 9 baths.
This is considered ’s premiere lot (see earlier post) with spectacular 300° views that include downtown , and the Olympics with the top of the skyline in the foreground. The location is minutes from downtown .
Bruce is the oldest of four brothers who were the pioneers of cellular communications. He had been listed by Forbes as one of the wealthiest people in the world but has not been on its recent lists as a result of declining stock market values. He is now involved in large scale commercial real estate investments with his Pistol Creek Financial Co. He is also involved in auto racing as president of Bellevue-based PacWest Racing Group LLC and director of Michigan-based Championship Auto Racing Teams, Inc.
More information about the mansion and the McCaw family is in Lake Washington 130 Homes on pages 88 and 106.
John Bacon, Thomas Ellison and Ellison’s and Debbie’s father, Bill Ellison (the founder of the company), were the principal owners of Bellevue-based Savers, Inc. The company is an international chain of thrift stores and operates under the name of in the PNW. The Bacons and Thomas Ellison own a mansion about a seventh of a mile to the northeast in that is for sale for $8.9 million.
(Revised )
Posted by David Dykstra at 3:03 PM 8 comments: 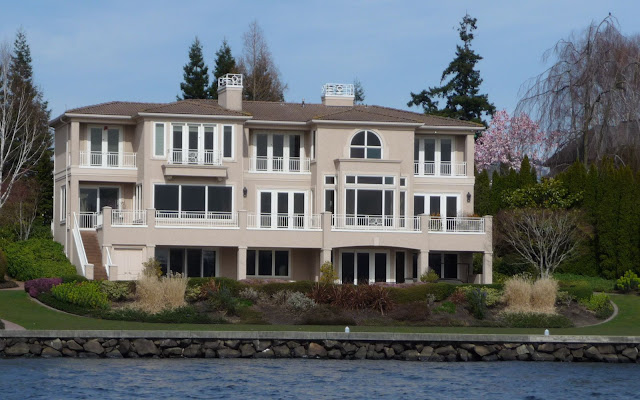 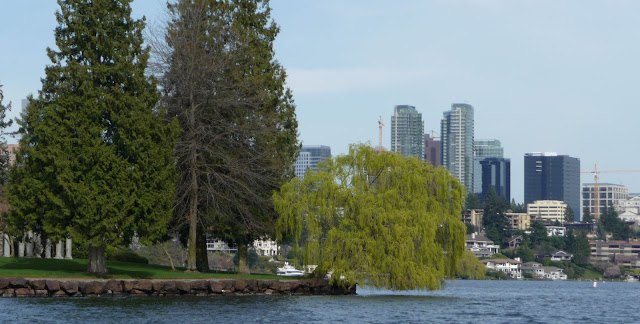 Looking across tip of Groat Point east towards Bellevue
Groat Point marks the Medina entrance to Meydenbauer Bay. This has been the site of many famous mansions. The first (McGilvra) house was built in the 1800s. In 1928 Miller Freeman purchased and moved into a 14 room mansion on this site. Miller was the owner of a Seattle publishing house and several journals. He was instrumental in getting the Lake Washington Ship Canal built in 1916. He is the father of Kemper Freeman and grandfather of Kemper Freeman, Jr. The Kempers have been responsible for major development of Bellevue. Kemper Jr. founded Kemper Development Company which is the major developer of downtown Bellevue.
The Point was subdivided into multiple lots. The property and mansion on the southwest corner of the Point is owned by J. Lennox Scott. Lennox is Chairman and CEO of John L. Scott Real Estate. The company was founded in 1931 by his grandfather and has become one of the largest and most successful regional real estate companies in the nation.
The next lot to the northwest is for sale for $11.3 million (2/15 post). It belongs to Richard DiCerchio, Senior Executive Vice President and COO of Issaquah-based Costco.
The property and mansion on the southwest corner of the Point was owned by Bruce McCaw and sold in January 2011 (2/13 post) to Michael V. Griffith, Trustee, for an undisclosed buyer for $15.3 million. Last year I received a rumor that J. Lennox Scott was negotiating to buy the property for investment purposes and to consolidate the tip of the Point and use part of the site for income-producing lavish events. This is a spectacular event site with 300° views that include downtown Bellevue, Mt. Rainier and the Olympics with the top of the Seattle skyline in the foreground. The location is only minutes from downtown Bellevue.
More information is in Lake Washington 130 Homes on pages 88 to 90.
Posted by David Dykstra at 12:38 PM No comments: 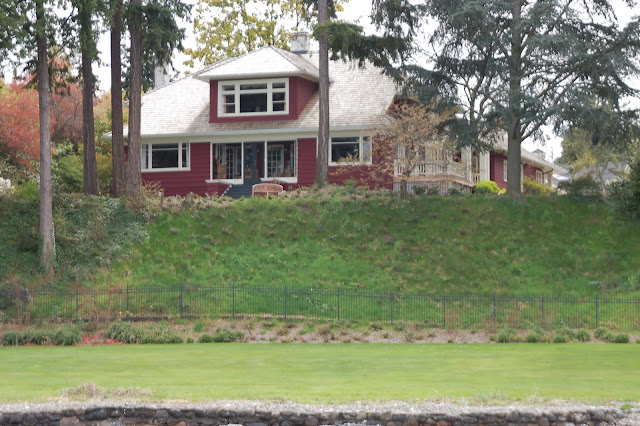 Tip of Yarrow Point
This was the home (or close to it) of Leigh S. J. Hunt (1855-1933) who owned the Seattle Post Intelligencer. He settled here in the late 1800s and named his estate “Yarrow” after the name of an estate in one of his favorite poems by William Wadsworth. He later purchased property on Hunts Point and that peninsula took his name. The house on this property was built around 1900. The house is about 100 feet from the water behind the trees. The waterfront, which was under water when the house was built prior to the locks, looks like a park but is part of the 3.54 acre estate. This house and the above photos and information are on pages 134, 159 and 162 in Lake Washington 130 Homes.
This is the tip of Yarrow Point, offering fantastic 180° views of Carillon Point to the east, Kirkland’s marina and downtown to the north and the north Seattle area to the west. From the MLS listing: “An unassuming entry quietly shepherds the Eastside's most magnificent lifestyle canvas, available to the market for the first time in over 70 years. A unique blend of rich history & poetic splendor converge at this 1900's period garden estate, extensively remodeled in 07. The property includes 3.54acres encompassing enchanting grounds & 465 frontage ft of prized Lake Washington shoreline. The privacy, scale & quality of the waterfront are unrivaled; a lakeside oasis for generations of enjoyment.”
Posted by David Dykstra at 5:20 PM No comments: 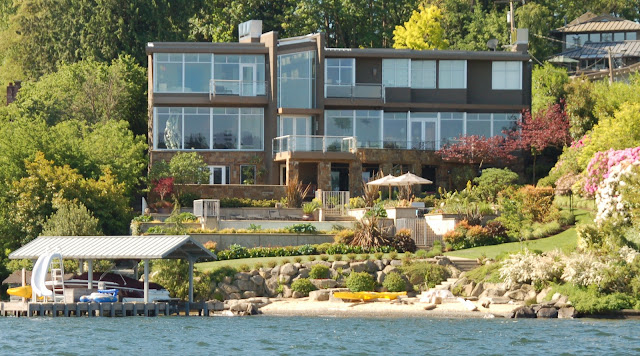 Pictures of Greenstein’s mansion on Mercer Island
Site of lavish fund raisers
The Seattle Times published an extensive article Friday 1/28/11 by Mike Carter about Jeffrey Greenstein. Greenstein and his partner, Charles Wilk, were each sentenced to four years and two months of prison. They were found guilty of recruiting wealthy clients to execute one the largest tax-evasion scams in U.S. history involving $240 million of evaded taxes in one year.
Prior to being indicted in 2009 for this crime, Greenstein was a highly regarded and well respected businessman and philanthropist in the Seattle area. He founded and ran Seattle based Quellos Group, a hedge fund, which he sold in 2007 to a New York firm for $900 million. He contributed generously to numerous charities and Democratic candidates. He was on the board of trustees of the Seattle Art Museum.
The photograph above, along with information about the mansion, is from page 76 in my book, Lake Washington 130 Homes.
Posted by David Dykstra at 12:33 PM No comments: