Charles Simonyi is a Hungarian-born former Microsoft executive. He was the man once behind constructing Microsoft Office's Word and Excel software. His mansion is one of the most picturesque and must-see places on (LW 130 Homes pages 4 and 94). The mansion is 19,000 sq ft on 1.3 acres with 300 feet of waterfront. The home is known locally as the “Windows 2000 House” and “Villa Simonyi.” It got the Windows 2000 name when Microsoft introduced Windows 2000. The rumor is a few windows were added to the house to bring the total to 2,000.
His former girl-friend, from the 1980s until 2008, was Martha Stewart. He picked her up with his personal jet when she got out of jail in 2005. He had a sudden infatuation with a new girlfriend Lisa Persdotter a Swedish socialite. They got engaged in on , the same day as 2008 Beijing Olympics opening ceremony. He was 60 and she was 28 at the time. They were married in , on , following three days of celebrations whose attendees included neighbor Bill Gates.
Simonyi was one of the initial commercial astronauts. He paid $25 million for a 2007 two-week International Space Station roundtrip aboard the Russian Soyuz space shuttles. He paid $35 million for a similar trip in 2009.
Posted by David Dykstra at 8:07 AM 9 comments: 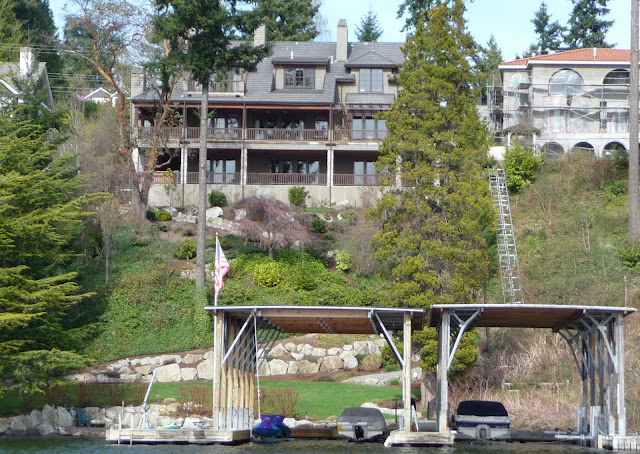 Detlef and Marianne Schrempf sold their mansion in April 2011 for $7.0 million to Yahn Bernier and Beth McCaw. The estate has 7,200 sq ft on 0.9 acres with 85 feet of waterfront. More information is in Lake Washington 130 Homes on page 85. This lot with an older home was purchased in 2000 and a new home was built in 2003. The home features covered moorage for a 60 foot yacht, a fabulous great room and kitchen with three fireplaces and a wing for children and guests.
Detlef starred for the SuperSonics from 1993 to 1999 and was an assistant coach for the team’s final 2006-08 seasons in .  He was selected to the NBA All-Star team 3 times and was the first NBA player born in to score 15,000 career points.  He was born in and moved from there to in his senior year of high school.  He led his school team to the state championship in 1981.  He starred at UW and was on the All-PAC-10 Team.  He started his NBA career in 1985 being drafted by the Dallas Mavericks.  He played on the Sonics team that reached the NBA finals in 1996.  He founded the Detlef Schrempf Foundation in 1996 to support organizations that provide hope, care, and assistance to Northwest children and their families.  Every June the Foundation hosts the Detlef Schrempf Celebrity Golf Classic in Port Orchard and a Celebrity Gala and Auction in Bellevue.
Yahn Bernier is Software Development Engineer at Bellevue based Valve Software. Beth McCaw is a based attorney.
Posted by David Dykstra at 6:16 PM No comments:

Berg’s Former Home and Yacht
The Seattle Times reported 3/25/11 Darren Berg’s (12/30/10 and 1/17/11 posts) creditors will probably recoup only 15 to 25 percent of their investments.  The article further reported the bankruptcy plan report stated Berg’s misappropriations started as early as 2001 but “the magnitude increased each year.”
Berg is charged in the biggest Ponzi scheme ever prosecuted in state.  Through his company, Meridian Group, he is accused of defrauding hundreds, some of whom their life savings, of more than $280 million.
Berg’s north end waterfront mansion was sold for $5.9 million in January 2011 by a U.S bankruptcy court.  The house is not included in Lake Washington 130 Homes. It is located between the homes on pages 42 and 43 and near the Roanoke Inn.  It is one house southeast of a mansion that is listed for sale for $6.45 million.
The weather finally got nice enough to go out on the water and take pictures.  The two previous posts have been updated with pictures. (Updated 12/30/11)
Posted by David Dykstra at 12:31 PM No comments: 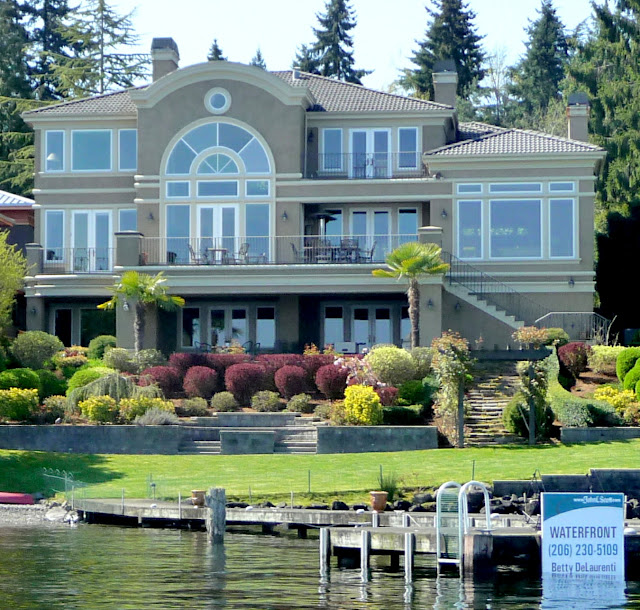 Home For Sale On Right
Darren Berg’s Former Home On Left
From MLS listing (Betty DeLaurenti and Julia Nordby, John L. Scott): (includes numerous interior photos):  “European style home, 6 BR,7BA w/a large bonus rm, exercise rm and a home office w/a separate entrance. Extensive use of marble, granite, tile and hardwood throughout. Grand formal spaces and a gourmet kitchen you may never want to leave. All is complemented by graceful manicured gardens, multiple decks, covered outdoor patio and a firepit at waters edge. Approx 104+/- feet of prime North End Lake Washington waterfront is ready for use with a L shaped dock, covered boat lift and a sandy beach.”
The home is  6,071 sq ft on 0.4 acres with 104 feet of waterfront.  This home is six houses west of page 43 in LW 130 Homes and one house northwest of Darren Berg’s (Ponzi scheme fame) former house (12/30/10, 1/17/11 and 5/22/11 posts).
Posted by David Dykstra at 12:25 PM No comments: 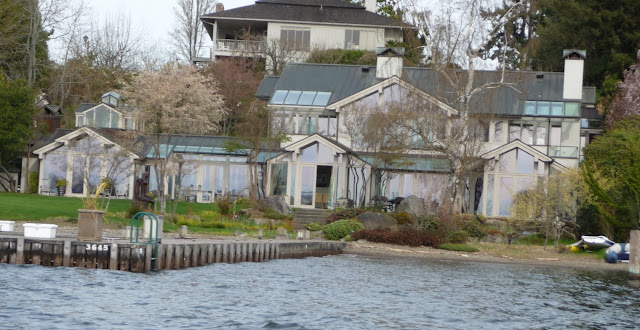 Christopher P. and Patricia Liddell sold their mansion in March 2011 for $4.5 million to Chandan Chauhan.  Christopher had been CFO for Microsoft and GM (see 3/12/11 post).  Chandan is a co-founder and Sr VP for based Intelius.  The company was founded in 2003 and specializes in searches of Internet records for background checks and personal and business protection services.  Intelius’s primary co-founder, President and CEO is Naveen Jain (page 95 in LW 130 Homes).
The estate has 7,365 sq ft on 0.63 acres with 134 feet of waterfront, 5 bedrooms and 5 baths. It is near the tip of Evergreen Point, facing west and about 120 yards north of Michael Mastro’s former mansion. The Liddells purchased the mansion in 2005 for $7 million. This home features a prime view, lush landscaping with a brook and pond, a large game room with a second kitchen, and two docks.  More information is in Lake Washington 130 Homes on page 127.
Posted by David Dykstra at 11:46 AM No comments: