The major Seattle fund raiser for President Obama and U.S. Senator Patty Murray on August 17, 2010, was at the new 7,300 sq ft mansion of Rob and Cori Glaser. 60 prominent Democratic donors attended the $10,000 per late luncheon. Rob, a former Microsoft mega-millionaire, started RealNetworks in 1995. He recently retired from his CEO position at the company.
RealNetworks produces music, video and other software for PCs, smart phones, and portable music players. Some of its best known products are RealPlayer and RealRhapsody.
Rob and his wife, Cori, are major Democratic contributors and fund raisers. They were strong financial supporters of Obama’s 2004 U.S Senate campaign.
Glaser owns two similar looking side-by-side mansions in the Madison-Park/Denny-Blaine/Madrona area. The 5,240 sq ft mansion on the left/south was built in 1980 and had a major renovation completed in 2008 when the new 7,300 sq ft mansion on the right/north was completed. This compound was not included in Lake Washington 130 Homes. It is between the McCaw and Rose Mediterranean villas on pages 38 and 40 in the book.
Posted by David Dykstra at 3:39 PM 2 comments:

The former Lytle mansion on Mercer Island sold in the June 2010 auction. My previous blogs regarding the auction are below and dated 5/24/10 and 2/20/10. The 1st auction had a minimum bid of $15 million. Several bids were submitted but each was contingent on a sale of property and all these were rejected. The 2nd auction minimum bid was $12 million without contingencies. The buyer was James “Peter” Edwards, the founder and CEO of Video Only. The Edwards family is moving from the Lakemont area of Bellevue.

Peter founded Seattle area (Tukwila) based Video Only in 1982 and it has grown to 14 stores in WA, OR and CA. The company is privately held by Edwards and his family. We bought our last TV from them and highly recommend them.
The home was featured on KING 5's Evening Magazine on April 12, 2010.
Both houses are in my book (pages 46 and 157): http://www.hundredhomes.net/

Map of the Stars Cruises 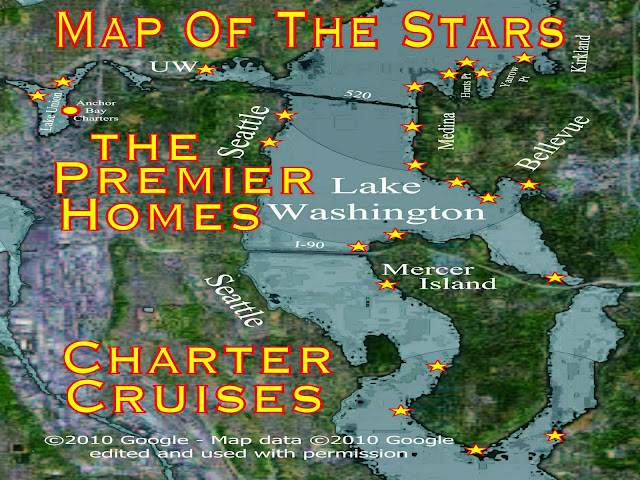 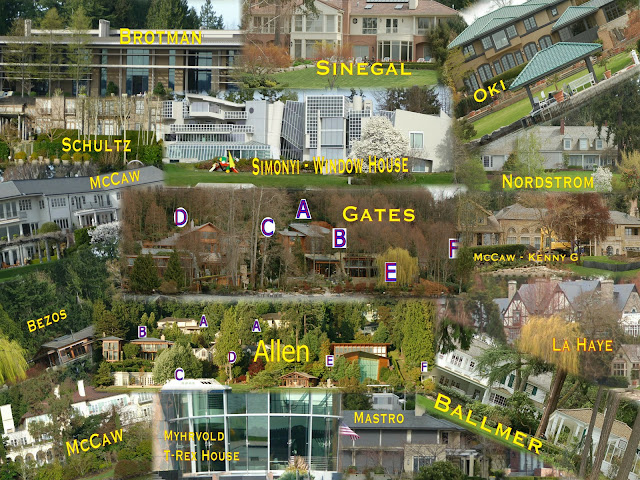 Anchor Bay Charters and I had multiple “Map of the Stars” cruises and parties this summer. The 3 hour “Map of the Stars” cruises included Lake Union sights (Sleepless in Seattle floating home, Chihuly’s Studio, views of Space Needle and downtown, etc.) and Lake Washington with the premiere waterfront mansions (Gates, McCaws, Schultz, et al.) of Madison Park, The Eastside’s Gold Coast (Meydenbauer Bay, Medina and Hunts Point) and the North end of Mercer Island. These tours include the homes of eighty percent of the state’s billionaires. The 4 hour cruises added most of Mercer Island and included all the state’s billionaires with Paul Allen’s 10 acre estate. I narrated most the tours and provided information as we view most of the homes in the book. The cruises were popular with Realtors and their clients as I also pointed out homes listed for sale for more than $5million.
The yacht has a wonderful upper level sundeck and a stately heated interior party and dining room with large picture windows. More information is at: http://www.anchorbaycharters.com/ and www.hundredhomes.net/Lake-Washington-Cruises
Cruises can be viewed on You Tube at http://www.youtube.com/watch#!v=RpPLK0KrzxY&feature=channel
Posted by David Dykstra at 9:15 AM No comments: 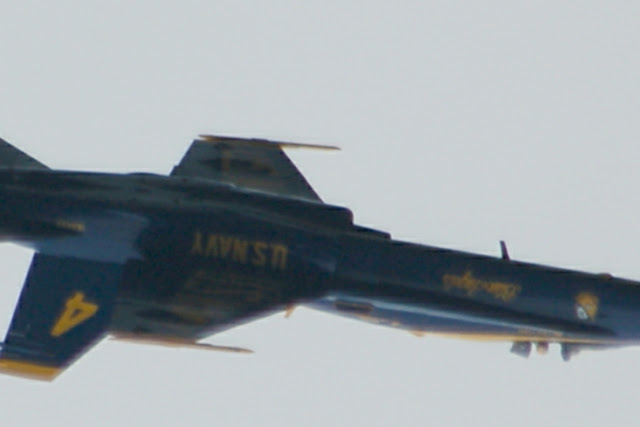 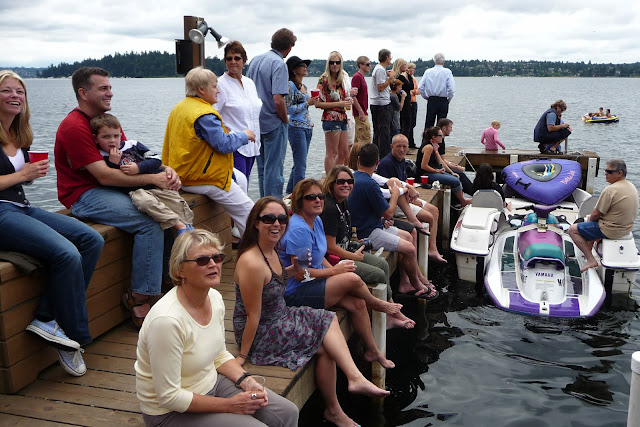 2010 was a wonderful summer with a lot going on. I’ve received some notes from my blog fans wanting more news. I am behind on my blogging but will catch up and keep current with weekly (average) postings. The big, time consuming activities this summer involved family, friends and our “Map of the Stars cruises” (the later blog that is above). Seafair was the center of our major activities. We had family visiting for 6 weeks with Seafair in the middle. We live on the west side of Mercer Island with our deck and dock on the 35 yard line for the Hydroplane races and the air shows.
In spite of the weather many thought 2010 was the best Seafair ever. My wife, Susan, and I had our whole family here (6 children, 6 grandchildren and 4 son-in-laws – 16 total) plus many friends. Friends and family are what made it great! The Blue Angels have 3 shows. The high show (clear weather), the low show (overcast) and the flat show (this year for the 1st time since I’ve been here). Plus they added an F-18 jets show before the Blue Angels’ show. We had more planes flying low over the dock than ever before!
Posted by David Dykstra at 8:49 AM No comments: