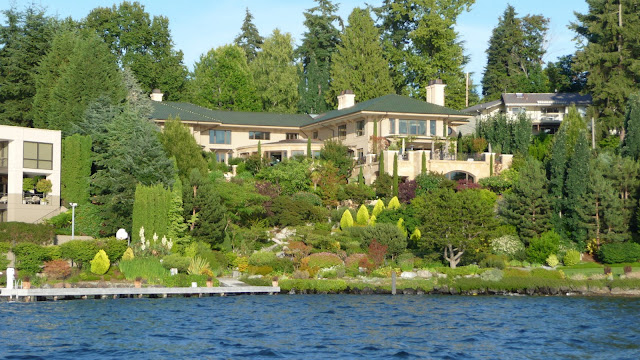 The Lytle mansion on Mercer Island is still up for auction. My blog regarding the previous auction is below and dated 2/20/10. That auction had a minimum bid of $15 million. Several bids were submitted but each was contingent on a sale of property and all these were rejected. The new minimum bid is $12 million without contingencies and the new deadline is June 30, 2010. The mansion is 22,800 sq ft on 2.0 acres with 150 feet of waterfront, 5 bedrooms, and 9 baths. It was built in 1977 and extensively remodeled and enlarged in 2000-01. It has an estimated $50 million replacement value. It was first listed for sale in 2004 for $40 million. The listing price was $35 million when I published my book, Lake Washington 130 Homes, in August 2009. Late last year the listing price was reduced to $23 million. My book also includes their new house in Hunts Point that was under construction at the time.
The home was featured on KING 5's Evening Magazine on April 12, 2010.
Both houses are in my book (pages 46 and 157): http://www.hundredhomes.net/

Posted by David Dykstra at 7:03 PM No comments:

This estate in Hunts Point (page 148 in Lake Washington 130 Homes, http://www.hundredhomes.net/) sold for $11.3 million in March 2010. This waterfront mansion was built in 2002, replacing a mansion that was purchased in 2001 for $5.8 million and torn down. The home buyer is listed as Joseph Gaffney, a partner with the Dorsey & Whitney LLP law firm. He may be acting as a trustee for an anonymous buyer. The former owners and sellers were Raymond and Linda Russo.  The Russos owned and managed numerous apartment complexes in the Seattle area. Two of their management companies are Quinault Apartment Associates LLC and R.P. Management. Raymond is a former regent at Seattle University and the Russos were co-chairs of the 2003 SU Gala. The estate has 7,460 sq ft of living space on 1.2 acres with 157 feet of waterfront.
March homes sales showed the most $1 million plus sales in the Seattle area since I started research for my book in 2008.
Posted by David Dykstra at 3:25 PM No comments: